Gradle is a build automation system using groovy. It adopts a domain language similar to Groovy, and is also the official build system of Android Studio, which is required to create Android apps. It supports several languages such as Java, C / C++ , and Python. Wikipedia contributors. (2020b, November 26). Gradle. Wikipedia. https://en.wikipedia.org/wiki/Gradle

To install gradle and execute it firstable download https://gradle.org/install/. Next set $PATH and $CLASSPATH. For more specific settings about the environment variable visit Getting started.

If things are going well, type gradle -v and check.

Make a JAVA project and file to build, and in the project folder make buld.gradle file. In this file apply plugin:'java'

If you do "gradle build", gradle tests, compiles and then makes jar file. This is it for basic gradle execution. For more complicated project dependency resolution process is needed. However, in this example, SERVUS BONUS, gradle wrapper is used. So, I will wrap it up here.

In this tutorial, SERVUS BONUS, gradle wrapper which is preferred way to build project is used. The biggest advantage of using it is when executing an project that already exists on a new environment, it enables direct build without any installation nor settings for different version of JAVA or Gradle.

Therefore, check the below code, and if JAVA version is other than JAVA 8, download JAVA 8 and set environment variable accordingly where the jdk file exist. 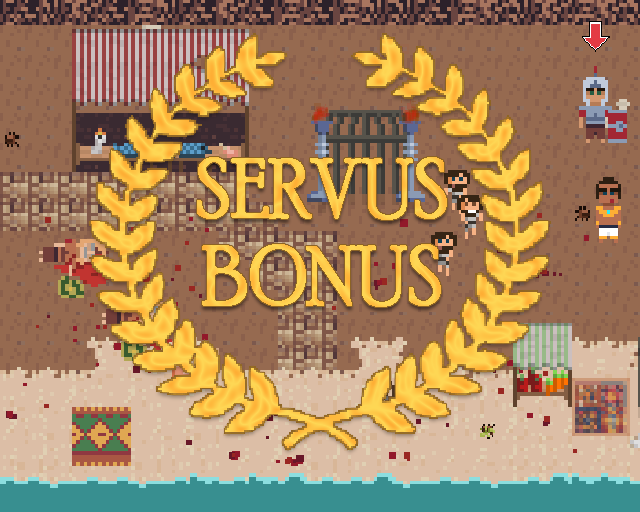 SERVUS BONUS is a 2D game made by gurkenlabs, the creators of LITIENGINE. You can find the code at https://github.com/gurkenlabs/litiengine-ldjam44.git. The project is available under the MIT license, so it can be modified freely.

A good slave is a good servant. A great slave is currency!

Play the tale of a slave monger with only one wish… to get admission to the great Roman open-air bath. Coming from the slums of Memphis, you have a long way of hardship before you. Gain respect by becoming the greatest slave monger of the Imperium Romanum.

SERVUS BONUS is a 2D action game about the story of defeating Roman soldiers and rescuing slaves as described above. Use this example to check how to execute and modify the example and the results of the modification.

How can I modify the example code?

Let's run the example first to see what it looked like before the modification. The process of building and running the example code will be carried out through the gradle. The environment was conducted at ubuntu 20.04 WSL, but it also works normally with normal native or virtual machine Linux.

WSL users should set up the environment so that they can float the display of the window using the ubuntu terminal.

Using the above command. Enter the bashrc file and add the following command to the last line.

Xming performs when wsl users request to float the display of the window using the ubuntu terminal to configure the display. To run a game made with LITIENGINE on WSL, Xming must be installed so that the game screen can be printed out.

By the end of the above process, WSL users can complete the WSL setup to float the LITIENGINE-based game.

Chapter 2: Build and Run with gradle

Use the above command to check the LITIENGINE commit log. If you lower this page, you will find a commit entitled Allow holding a speechbubble.

If you find this log, use the command below to downgrade the LITIENGINE. Use the --hard option because subsequent codes are unnecessary when using this example.

So we prepare the appropriate version of the LITIENGINE code for SERVUS BONUS.

2. Get Permission of Gradlew

Now that we're all set, let's run with build. Use the commands below to build and execute SERVUS BONUS.

If you do not insert ./ in front of the gridlew, an error may appear that there is no command called gridlew, so please insert ./ to specify that the gridlew inside the folder is executed. After completing all of the above steps, the screen below is output and you can run SERVUS BONUS.

Let's modify the downloaded SERVUS BONUS code so that the game can do what we want. There are three parts to modify through the code. 1) Attack speed, 2) Movement speed, 3) Change jump to dash. To modify the code, you must access the src/de/gurkenlabs/ldjam44 folder inside the litiengine-ldjam44 folder. Inside the final folder, ldjam44, there are codes that implement SERVUS BONUS's game operating mechanism.

Let's open the Strike.java file inside the abilities folder. Then you can find the code below.

This code applies information about the ability of the character to be a Strike. The lower the cooldown, the more attacks can be carried out, so let's reduce the cooldown.

Cooldown was reduced to 60 for much faster attack speed. Then try building and running and you'll get the following results.

We can see the speed of attack that has been overwhelmingly faster.

Let's open the Player.java file inside the entities folder. Then you can find the code below.

Increase the Velocity to 100 for much faster movement speed. Then try building and running and you'll get the following results.

We can see the speed of movement that has been overwhelmingly faster.

Let's open the JumpEffect.java file inside the abilities folder. Then you can find the code below.

This code allows the player to take an action called monger-jump or monger-jump-right, which is set in advance when the player requests a jump. These actions are printed on the screen through the code below.

The jump is carried out by reading monger-jump or monger-jump-right from spritesheets and printing them on the screen. These spritesheets are stored inside the game.litidata file in the litiengine-ldjam44 folder.

The code above shows that a specific image is called up and printed on the screen. This is data that cannot be modified through code. It is something that needs to be modified in utiLITI.

Chapter 4. UtiLITI run and utilize it Inside the litiengine-ldjam44 folder downloaded beforehand in chapter 2, go to File-Open and open the source, game.litidata for map editting in SERVUS BONUS.

Chapter 5. Modify the example in utiLITI

Let's modify three parts 1) Attack speed, 2) Movement speed, 3) Change jump to dash just like in chapter 3 with utilLITI to notify difference between changing code and using utiLITI and see what part is more efficient than other in comparison.

There is no figure that manipulate attack speed in utiLITI. Combat figure has hitpoints, still, it does not affect the attack speed nor attack degree just like moving speed. (Manipulated hitpoints 100 to 1) If you click on icon(creature) you can see the figures of movement. UtiLITI provide acceleration, deceleration, velocity figures. These figures were used to consider whether utilLITI can moderate speed within only itself. Since code might affect the speed data, in this tutorial, horse creature was created which was created only within the utiLITI to make horse icon independent of JAVA library. Yet the horse's velocity never changed within the utiLITI operation. This indicate utiLITI cannot change the icon's physical activity.

To change jump to dash, two ways are possible. One is to moderate the library code which is too complicated, because all the "monger-jump", for example, must change to "dash" (both data types are string). Secondly, it is easier to change just the icon leaving the icon's name "moger-jump". In this case, modification is way easier than looking up for all the words in JAVA library.

Setting the creatures' location is easily done by the utiLITI whether than library. You just need to drag the icon and place it in the location you.

Editting on creature is also delivered by the utiLITI readily. Figure shown below show this well. In utiLITI, sprite images in spritesheets can pretend to be active by giving spritewidth and spriteheight a proper value. Also duration contributes for the smooth movement.

Chapter 6. What is the difference between utiLITI and code?

Code library and utiLITI compared, almost everything in the game can be changed with JAVA library itself. However, if you use the map editor, utiLITI makes it easier to modify the layout of icons or the icons themselves.

In particular, modification of the icon itself is possible only with utiLITI as shown in the figure. Note that icon name must be written in (creatures's name)-idle/walk to be added in map editor. Therefore, except for updating icon images, utiLITI is better used with JAVA library code interaction.